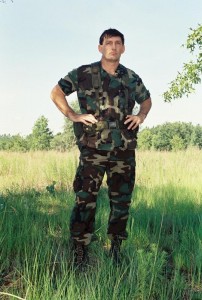 Kania, a former Vietnamese/Thai-Lao interpreter, was the senior coordinator (USAFSS) for National Security Agency intelligence gathering missions along the Ho Chi Minh Trail. During this period, as a personal project, he collected information that would lead to an ethnography of the So people of Northeast Thailand. Included in the study is a phonetic alphabet, the first for this spoken language. (Documentation)

As a licensed private investigator in the early 1980s he worked undercover for a NASA contractor.

As a Marshallese police officer, he was directly involved with operations against Russian (Soviet) special forces units at Kwajalein Atoll in the Republic of the Marshall Islands from 1986-1988. (Documentation)

He has written about a number of diverse subjects as a result of his travels and eclectic interests. They include: Southeast Asia (politics, sociology, and language), sports, physical fitness, nature, Pacific Islanders, intelligence gathering, and human interest.

He has participated in several sports (primarily basketball and soccer) at several levels, from college to a prison league. Along the way he has collected BA degrees in philosophy and political science from the University of Central Florida. Among his language skills are a working knowledge or better (speaking, reading and writing) of Spanish, Thai, Vietnamese and Arabic.  (little or no active use for over 15 years.)